~Scott Tracy is the lead guitarist for The Hatfields and the owner and manager of a popular restaurant called Totally 60's.~

Likes: Helping people, his job, chess, whenever Gordon is on his best behavior and not causing mischief, cooking, flying his beloved Thunderbird 1, puppies (honestly, who doesn't like puppies?), music

Dislikes: People in danger, whenever Gordon isn't on his best behavior and is causing mischief , whenever he burns whatever he's cooking or himself by the stove, whenever his beloved Thunderbird 1 gets wrecked

Least favorite food(s): Lemons, limes, onions, crunchy peanut butter (the kind with the nuts in it), any kind of ice cream that has nuts, anything he considers "disgusting"

Known prized possession(s): A Fender Stratocaster he received for his 14th birthday

Scott is very kind to others and is always willing to help. He's also very cheery, leading to the fact that he sings while he does his janitor duties, sometimes playing air guitar on his broom or dancing with his mop, bringing smiles and giggles to many students and staff, including the principal. At home and on weekends, he's relaxed and has a good sense of humor. He also is an expert cook. He's also smart, bold, and has quick wit and thinking. When doing his International Rescue duties, he is very determined to save the people he's saving.

Scott in the cockpit of Thunderbird 1 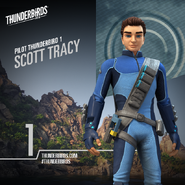 Scott's teddy, "Mr. Bo-Bo"
Add a photo to this gallery
Retrieved from "https://any-idea.fandom.com/wiki/Scott_Tracy?oldid=37464"
Community content is available under CC-BY-SA unless otherwise noted.