John Tracy is the drummer for The Hatfields.

Nickname(s): Johnny (called that by Alan during childhood)

Likes: Helping people, coffee, whenever Gordon is on his best behavior and not causing mischief, puppies, Batman (gotta like Batman!), music

Dislikes: People in danger, spilling his coffee, whenever Gordon isn't on his best behavior and is causing mischief, whenever his coffee break is disturbed, getting his bus either in a pothole or giving it a flat tire

Known prized possession(s): A red Ludwig Epic 6-Piece drum kit he was given as a Christmas present by Scott

Bus Driver's Uniform: An indigo jacket over his shirt and a matching cap

Usually, John is quiet and cool-headed, but he has a very bad temper and usually gets furious at Gordon whenever he causes trouble or makes a prank-call. Alan does bother him sometimes, but John, since Alan is the youngest of the Tracy brothers, doesn't get as mad at Alan as he does with Gordon. This maybe why Alan doesn't bother John every day like Gordon does.

John driving his bus and singing "Another One Rides the Bus"

John on his coffee break 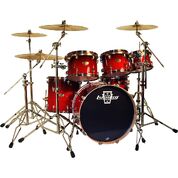 John's drum kit
Add a photo to this gallery
Retrieved from "https://any-idea.fandom.com/wiki/John_Tracy?oldid=108361"
Community content is available under CC-BY-SA unless otherwise noted.