~Gordon Tracy is the music teacher at Fred Rogers Middle School and a member of a top-secret organization known as International Rescue, along with his brothers Scott, John, Virgil, and Alan.~

Likes: Pranking people, playing the guitar, teasing his oldest brother over the fact he still sleeps with a teddy.

Known Prized Possession(s): A Rickenbacker 360 12-string electric guitar given to him on his 12th birthday, a Gibson Hummingbird he got for Christmas that same year.

Casual Outfit: A gray shirt with a blue center on the collar and blue buttons, dark blue jeans, a red belt with a silver buckle, light blue shoes

Gordon is very funny and usually tries anything to make his students laugh. Though he's also very determined when it comes to saving people. 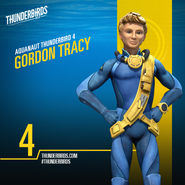 Gordon's Hummingbird, the same one previously owned by Scott
Add a photo to this gallery
Retrieved from "https://any-idea.fandom.com/wiki/Gordon_Tracy?oldid=37463"
Community content is available under CC-BY-SA unless otherwise noted.