~Alan Tracy is a teacher at Fred Rogers Middle School and a member of a top secret organization known as International Rescue, along with his brothers Scott, John, Virgil, and Gordon.~

Nickname(s): Al, Allie (called that by his brothers)

Likes: Helping out his older brothers and other people, hanging out with his brothers, Grandma Tracy's home-baked chocolate chip cookies and brownies, spaceships, Buzz Lightyear

Dislikes: Seeing any of his brothers mad or upset, getting yelled at (especially from John), people in danger

Known Prized Possession(s): A Buzz Lightyear action figure Virgil gave him for his 5th birthday, a Greek fisherman's cap he got at a swap meet.

Alan really likes to help people out, especially his brothers and his students. Though he also likes to help his older brother Gordon with his pranks as well as prank none other than Gordon himself. 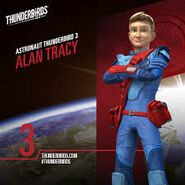 Alan at his blackboard

Alan's hat
Add a photo to this gallery
Retrieved from "https://any-idea.fandom.com/wiki/Alan_Tracy?oldid=45477"
Community content is available under CC-BY-SA unless otherwise noted.